Normal people don’t do that.  I know, because I used to be normal.  I would see people all hot and sweaty, running through town in the middle of summer.  In the rain.  In the cold.  In the dark. Normal people would be at home, on a comfy sofa.  Not sweating.

One day, I casually mentioned that I might like to do a half marathon as part of my “I’m Turning 50” bucket list.  Big mistake.  Huge.  Everyone started posting links to half marathons and tagging me.  Oh, and Spartan races too.  Spartans?  Really?  Do I look like I need to be committed?  If I ever post that I have signed up for a Spartan, that is your signal that I am being held against my will and need help.

So our friend Lisa G. posts a link to the Tomoka half marathon.  Price is reasonable and it’s not too far away.  The course looks really pretty.  Oh, did I mention there was a bridge?  And you have to go over it twice?

We hemmed and hawed and finally registered.  And then reality hit.  In four weeks we were doing a half marathon.  Um, WTH?

It turned out that getting there was as much of an ordeal as the race itself.  We took the wrong exit in Jacksonville and found ourselves in a sketchy Burger King that couldn’t serve food.  How does that even happen? Apparently their systems were down, and without technology you’re not getting a Whopper.  Or even a drink.  But it did remove the guilt we may have felt for using their restrooms and not buying any food. Thankfully there was a Mickey D’s nearby so someone-named-Lisa-that’s-not-me could get her caffeine fix.

Back on the road, we found the right exit and were heading for Daytona.  We cruised along, 80s music blasting and coffee flowing.  Life was good.  We had 2.5 hours until packet pick-up ended.  And then it happened.  Traffic slowed to a crawl, and then stopped all together.

This was not good.  SO not good.  We inched along.  I could run faster than we were driving, for crying out loud.  The lady in the car next to us was making all kinds of crazy gestures.  She was over it.  We all were over it.

We waited.  And waited.

Finally, things began to move.  Once we got moving again our ETA for pick-up was 5:30.  We pulled it off with 25 minutes to spare! From there it was on to the hotel and the Great Unloading began.

Funny thing about runners.  We have a lot of gear.  Before I got into this I thought all you needed was a pair of shoes.  But I’m complicated.  I need options.  We were gone for just over 24 hours.  I brought three pairs of shoes, at least three complete outfits – not counting what I was wearing to the race – and more technology that NASA used to put a man on the moon.  (As if that weren’t enough I came home with seven new shirts, eight pairs of socks, two bras, and a hat. SMH…)

Fortunately, Lisa G. has a “three body trunk” so there was plenty of room for everyone to stash their luggage.  And yes, it’s comforting to know that you have friends who measure trunk capacity in the same terms you do.

With bibs in hand and gear stashed, it was time to find some grub.  After striking out a few times, we came across a place called Charlie Horse.  It was FABULOUS!  I already want to go back and eat there again.  If you’re ever in Ormond Beach, you need to go.  The seafood was amazing.  Heck with carb-loading the night before a run…

Yeah…Lisa Lisa & Cult Jam are in the house.  Totally.

And before we had time to think about what we were doing, we were on the shuttle heading to the race.  The moment we had dreaded and looked forward to was here.  Before we left on Friday I posted a quick picture on my Instagram feed with my time predictions.  I had no idea what to expect.  My friends told me about hitting the wall at mile 10 or 11.  There was the bridge to think about – twice – and my worry that I wouldn’t be able to keep up my intervals for 13.1 miles.

We started in the dark.  It’s a weird feeling, running over a bridge in the dark.  There’s a definite advantage in not being able to see how high up you are, especially if heights make you nervous.  The cars stopped in the other lane clapped and cheered as we went by and I waved to a few of them.  Joey and I were using different run/walk intervals, so we would catch up with each other at random points.  We were evenly paced until the  three mile mark, and then I slowly started to pull away from him.

There were water stops a’plenty, and I took advantage of every one.  The volunteers were all encouraging and supportive.  The sun began to rise and I stopped and looked back toward the bridge for a quick shot. 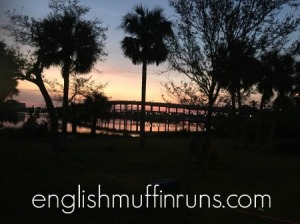 But there was no time to linger.  I had ten long miles ahead of me.  The run/walk intervals clicked along, and at every mile marker the Race Joy app chimed in and let me know where I was.  This was my first time using Race Joy, and I really enjoyed it.  We were able to track each other’s progress during the race and would get a text message when we hit a mile marker.  After a certain point, I think it was mile two, it started to announce our estimated completion time – 3:01:50.  I shook my head.  “There’s no way,” I thought to myself.

The road went on.  And on.  There was a long straightaway from the bridge to the state park entrance, probably a good 3+ miles or more.  Finally, I made the turn into the park.  There were several runners coming out and heading back to the finish line.  “You’re almost there!” called one of the volunteers.  “Liar!” I yelled back, laughing.  She waved back.

Once inside the park, the paved road gave way to dirt.  There was an aid station ahead fully stocked with drinks, gels, and bananas.  As I came around a bend in the road, I looked up and saw him:  it was Elvis!  We saw him at Gate and now he was here, decked out in his white Vegas jumpsuit!  I tried to get a picture, but it was like trying to photograph Bigfoot.  Come to think of it, you never see Elvis and Bigfoot at the same time…

Not long after the King passed me by, Lisa G. was running toward me. She gave me a huge hug and I was back on my way.  The turnaround point was at mile 7 and there was supposed to be a statue of Chief Tomoka there, and a good spot for a selfie.  He was there, but too far away for a selfie.  Instead I found a pretty tree with the sun coming up behind it.  Sorry Chief.

Mile nine came up just as I was leaving the state park.  My hip flexors and knees were beginning to ache a little,  and my friends’ warnings about hitting the wall echoed in my head.  I brushed them aside and turned up the music.  Once again Tom Petty came to the rescue.  The Race Joy app was consistently telling me that I would finish close to the three hour mark, and I was consistently telling myself it was a big fat liar.  I still had the bridge to deal with, and I had no idea how I would feel at mile twelve.

I didn’t hit the wall at mile ten, but delirium set in for a few minutes.  I imagined that I was at mile nine, heading toward mile ten.  In reality, I was at mile ten going in to mile eleven.  A brief wave of disappointment washed over me.  I was over it and wanted to be finished.  Thirteen miles was just too much.  But a soft, electronic voice whispered in my ear and told me that I was at mile eleven with estimated completion time of 3:00:33.  Yeah baby! 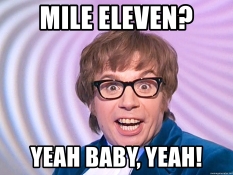 Two more miles were all that separated me from the finish line.  I forgot about my hips and knees.  I passed people.  I had to go off the road and into the grass to do it, but I passed them.  Runkeeper was set to update my distance and pace at each quarter mile.  My pace had been 13:50 for so long that I thought something had gone wrong, so I opened the app on my phone for a few seconds to watch the clock.  There was no mistake – I really was that consistent.  Holy cow…I just might pull this off!

Just before mile twelve there was a beer stop.  An amazing bunch of guys from a local mechanic’s shop were passing out paper cups of beer.  Ben Franklin allegedly said that beer was proof that God loves us and wants us to be happy.  At that moment I was ecstatic and I told one of the guys that I thought I loved him.  He laughed.  I had never been more serious in my life.

And then I was there, at the bottom of the bridge.  As much as I wanted to I knew I didn’t have enough left to run the whole thing.  So I did intervals on the way up.  When I got to the top I looked out over the water.  “It’s now or never,” I thought.  I couldn’t run up but I darn sure could run down.  All the way to the bottom and around the corner.  It was a slow, ugly run.  I caught up to a couple of young women and we ran under the bridge together.  Then it was a slow uphill turn to the left.  There was a wonderful older gentlemen standing near the sidewalk cheering us on, and he came over and high-fived us as we passed.  One more turn and there was the finish line.

I had all but ignored the timing apps, but as I crossed the line Race Joy announced that I finished at 3:02:52.  I looked up and there was Lisa G. holding my medal!  I have never been so happy to see that crazy, coffee-addicted woman in my life.

We checked Race Joy and saw that Joey was on the bridge. The volunteers at the finish ine were absolute sweethearts and let me give Joey his medal.  He came in at 3:15:10, a good fifteen minutes ahead of his goal.

Two days later I’m still a little in awe of the whole thing.  I’d be lying if I said I haven’t started looking for another half to do sometime this year.  But not just yet.  There’s a mountain of laundry calling my name and our running clothes should be classified as biohazards.

But we did it! 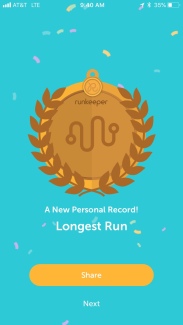 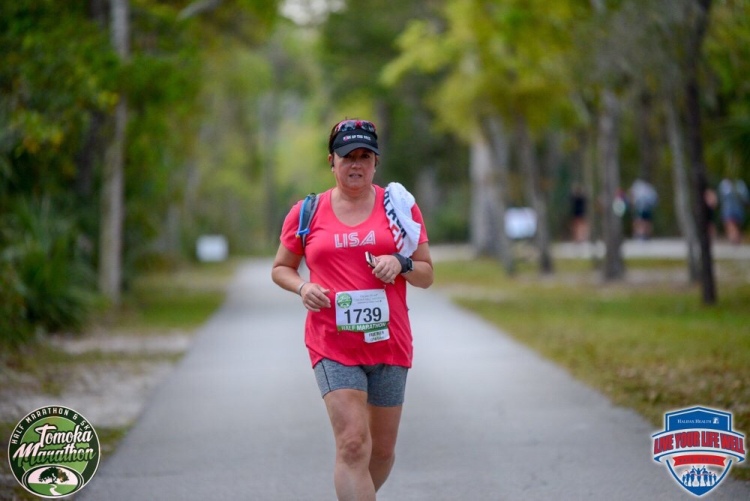