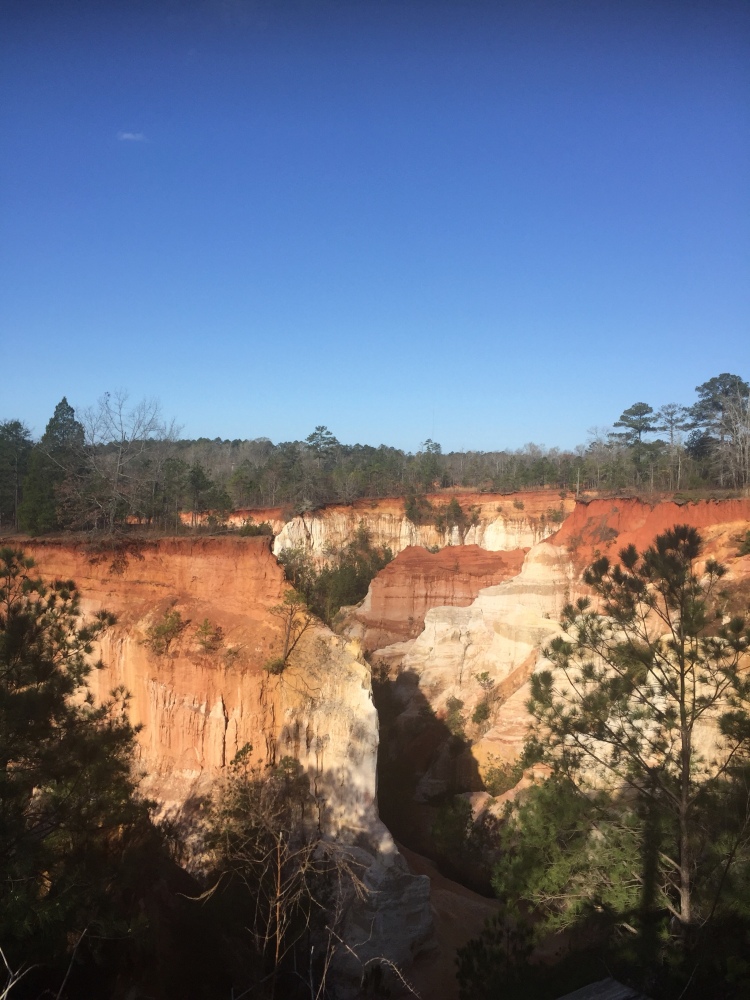 Trail Runs – gotta love ’em.  If you didn’t, there’s no way a rational and sane person would get up at 4:15 am and drive three hours to do one.  And we’ve done this one three times now.

It’s always reassuring when you have friends at a race, and this was no exception. Deborah and Kenny, who run with us at home, were there.  And our friend Chris was there with the Good Life City Runners from Albany.  The GLCR also provided support for the aid stations. 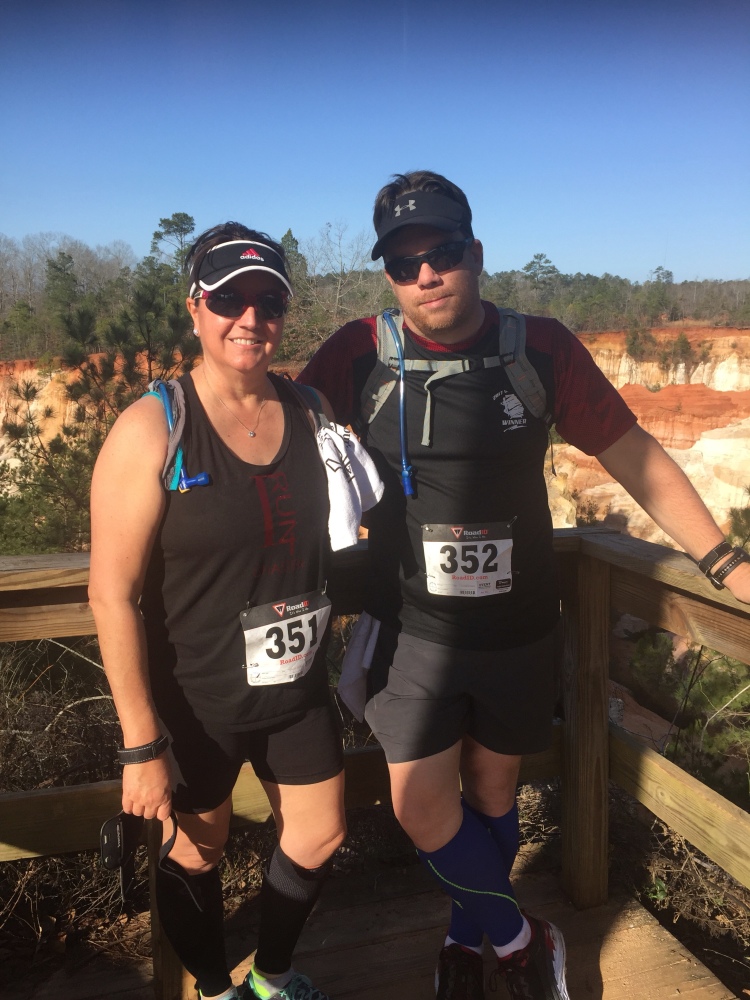 The first mile or so was great.  We were still fresh and full of energy, and for once we were part of the pack.  The slower part, mind you, but still….

We trotted along, measuring our run to walk intervals and feeling a little pleased with ourselves.  Maybe a little too pleased.

As the trail turned downhill, we saw part of the stream that wound its way through the floor of the canyon.  The red Georgia clay on either side of the water formed a thick, sticky mud that would suck the shoe right off your foot if you weren’t careful.  We managed to escape without losing our footwear, but those poor Hokas will never look the same again.

After the  stream crossing we caught up to one of our friends from Valdosta. She pointed to the path in front of us and said “take a picture of that.” We looked in the direction she was pointing. And then looked up.  And then up again.  And again.  And freaking again.

We had stopped at the base of the hill (and I use that term very loosely) and looked back and forth at each other and then back up the hill.  I remembered it being steep.  I didn’t remember it being vertical.

I looked down at the heart rate display on my Fitbit.  138. “Not too shabby,” I thought.  I began to climb, taking short strides and leaning slightly forward.  After a few minutes I paused to wipe the sweat/tears from my face.  As I took a drink from my Camelbak I glanced at the heart rate monitor.  In my delirium I saw OMG.

Onward and upward.  Deborah and Joey were behind me and I pushed on.  I had a goal.  I was crossing that finish line at 2:00:00 if it killed me.  My breath came in short, shallow gasps and I could feel the color flooding my face.  My Fitbit mocked me.  WTF.

I stopped for a few seconds and braced myself against a tree to catch my breath.  My heart pounded in my ears and I felt vaguely queasy.  “This is not the time,” I said to myself.  “No one wants to see that BK sausage croissant you had for breakfast.”

Another sip of water and I was off.  The top of the hill was finally in sight.  A few more steps, a slight stumble on a rock…and I was there.  The sweat evaporated on my skin, leaving a salty crust in its wake.  I felt like a giant salt lick and worried that I might be ambushed by a wayward deer.

Joey reached the summit a few minutes later.  Our pace had slowed to 16:20-ish per mile.  Math has never been my strong suit, and after climbing the “stairway to heaven” I was in no shape to calculate our finish time.

Thankfully, the trail was downhill for a while.  We were approaching the three-mile mark and wondering how far it was to the aid station.  “Where are those Boy Scouts when you need them?” I asked.  The first time we did this, the Scouts had set up a killer aid station in a shelter on top of one of the larger hills.  It was like hitting Waffle House at midnight on a Friday after a night out with your friends.

But alas, it wasn’t meant to be.  The shelter came into view, and there were no Scouts.  No junk food buffet.  No drinks.  Just a group of semi-conscious guys who barely acknowledged our passing.

Joey and I looked at each other. “Well THAT sucks,” I said.  Joey looked back over his shoulder, wistfully.  “I wonder if they had any beer,” I heard him say quietly.

The trail fell away sharply.  Joey and his giant size 13 wides stomped their way down, planting themselves firmly on the hard packed clay.  I, on the other hand, picked my way with laser focus.  As my husband likes to say about me, “she’s a beautiful woman but she’s clumsy as hell.”  He waited patiently at the bottom as I slipped and stumbled my way down.

The wind rustled through the trees and brought the sound of AC/DC to our eager ears.  That could only mean one thing – the aid station.  We quickened our pace and found ourselves face to face with the awesome folks from the Good Life City Runners, who we met at Chehaw Park.  They remembered us from the race and we stopped for a few minutes for snacks and a picture.  (Thanks again – you guys are the best!)

We had just passed the five-mile mark with a good 40 minutes or so until the 2-hour mark.  But there was a flaw in the slaw.  We still had the riverbed to cross, and the slow, soul-crushing climb back to the ranger station.  And we were nowhere near the finish line.

I wondered if I should break into my stash of Keebler Fudge Stripe minis that were in the pocket of my Camelbak. Reaching behind me, I could feel that there wasn’t a lot of water left and decided to wait.  The promise of a hot dog at the finish line buoyed my spirits as the woods began to clear.

The riverbed appeared in front of us, the slippery red mud glistening on either side.  I saw the footprints of the runners who had passed before us.  The mud oozed up and over my feet, clinging to my shoe as I went.  Branches and limbs poked and prodded me.  I gave up on the idea of dry feet and ran down the middle of the trickling stream.  The cool water washed over my shoes.  For a brief moment it felt good – until it hit my insoles.

The “squish squish squish” and mild chafe of wet, gritty shoes immediately wiped away any relief the water had tried to offer.  I still had at least a mile and half to go and a giant hill to climb.  In wet shoes.  Wet, gritty shoes and socks.  Wonderful.

We followed the red clay of the riverbed until, at last, we saw the sign to turn left.  It was time.  We were at the base of The Widow-maker: the long, steep, gravel-covered climb to the ranger station. There were several park visitors making their way down, among them a group of Boy Scouts (about time you show up, kids! Where’s my oatmeal pie?).

Their leader raised her arm as we approached.  “Everybody stop!” she yelled. The boys behind did as they were told and watched with wide eyes as we came toward them.  By then we must have looked like Swamp Thing.  We were both caked in mud up to our ankles, red-faced and dripping with sweat.  The boys moved to one side and allowed us to pass.

It was here that Joey began to fall behind.  My goal of two hours was less than fifteen minutes away and Runkeeper taunted me by calling out that we had completed six miles.  Things were beginning to look bleak.  I heard a voice call out behind me. “Go on,” he said.  “Don’t wait for me.”

I looked back.  He was holding on to the railing.  “Keep going.  I’ll be right behind you,” he said.  I wrestled with my conscience for a moment before I turned and started to climb.

The path twisted and turned, gravel crunching under my soggy shoes.  People stopped and stared as I passed them.  I searched their faces for encouragement and was met with blank stares.  “What, you’ve never seen anyone run through a canyon?” I thought.  “I hope you trip.”

It was then that I noticed my vision was slightly blurry.  I rubbed my eyes and couldn’t feel my contact lenses.  I wondered if they had popped out.  Or maybe melted and ran down my cheeks.  As bad as it might seem, that meant I had .0005 grams less to drag up that hill.  I blinked hard and felt them shift, and things came back into focus.

Finally the gravel gave way to grass and dirt and I was at the top.  I had ten minutes left.  It was now or never.  My legs ached and my lungs burned with the effort of the climb.  The red markers fluttered in the trees above the path.  I rounded corner after corner, thinking that the next would be the opening to the finish area. 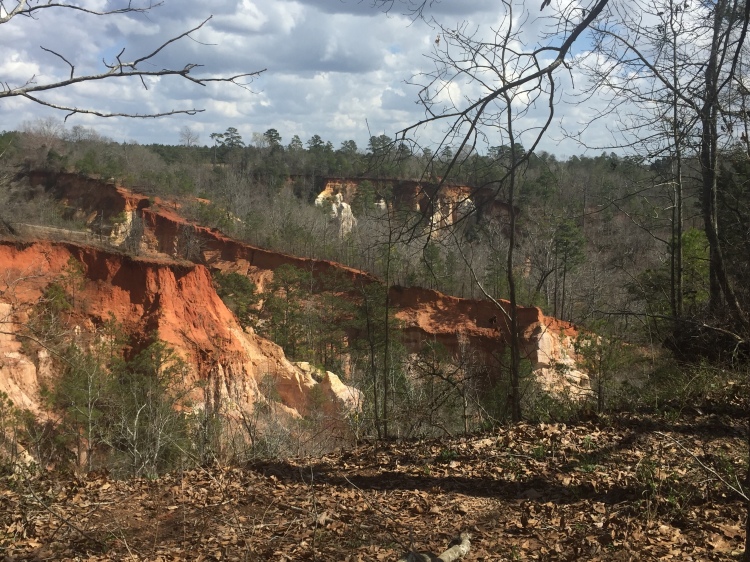 I glanced at my watch and saw two hours had elapsed.  Time to regroup.  Last year’s time was 2:10:??.  New goal:  anything better than that.

Collapsing on the picnic table bench, I turned and watched for Joey.  The smell of hotdogs floated on the breeze and my stomach growled in response.

The clock showed 2:08:00 when I saw him.  I called out to cheer him on, my voice weak and shaky.  I would have taken a picture as he crossed the finish line if my hands hadn’t been full of food.

With our medals hanging from our necks, we shoveled food into our mouths like we hadn’t eaten in days.  Those were the best damned sausage dogs we’d ever had. 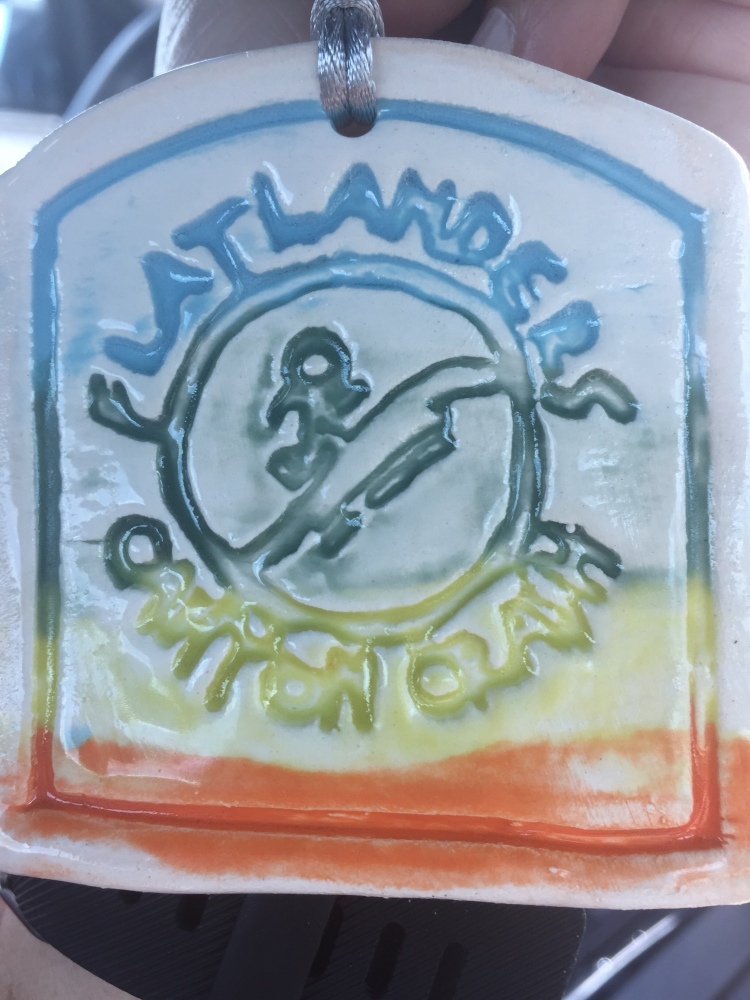 After we recovered, we decided to visit the ranger station.  The red paint of our car gleamed under the sun, echoing the sunburn on my shoulders.  Our plan was to drive the half-mile or so to the station. Halfway there, one of the rangers flagged us down and said the parking at the station was full and we would have to park in the overflow area. And walk.  Yay!  Not.

Wouldn’t you know it?  When we got to the station there was plenty of parking.  By then we didn’t care.  We bought drinks and a few souvenirs, and sat outside for a few minutes.  The feeling of accomplishment that comes after a race had settled in and suddenly my shoes didn’t feel nearly as wet and gritty.  I wore my sweaty sun visor like a badge of honor.

Walking hand in hand back to the car, I smelled something.  Something bad.

“Remember in the car, on the way here, I said that you smelled good?” I asked.

He turned to me and smiled. “Yeah, I remember.”