It’s the Little River Run 5K!  We made our way north to Adel, Georgia to run through Reed Bingham State Park.  The race was previously known as the Road Kill Run, which is exactly what you feel like when you’re done.  But all good things must come to an end and someone decided that wasn’t the most PC name for a road race.  It’s now named after the river that flows through the park and heads toward Valdosta.  Incidentally, we kayak on the Little River quite a bit!

We got to the park early – we always overestimate how long it’s going to take us to get anywhere.  Well…at least Joey does.  I, on the other hand, prefer to live on the edge and come squealing in on two wheels with a minute to spare.  Oh, wait.  That’s when I go to work.  Never mind.

Being early does have its advantages.  You get a front row seat to a beautiful sunrise.

There’s also plenty of time for pictures and warm-ups, and boy did we need a warm-up.  I was very grateful to find a long sleeve shirt lurking in the back of my car.  Joey wasn’t as lucky and broke the unwritten rule of wearing the race shirt before you run the race.  I know.  Oh, the shame. 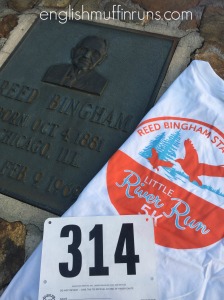 After trotting up and down the road for a little bit the cold wasn’t as bad.  The sun was climbing higher in the sky and we shed our extra garb.  We’ve learned the hard way that by the half mile mark that you come to regret the extra layers.

Once again, Runkeeper decided to act a fool and didn’t start exactly on time.  It could be operator error or I may need to tweak the settings. Hopefully I can figure it out before the next race.

Joey started out with a pretty good lead.  I was feeling great as we crossed the bridge and looked out over the water.  The course went around the edge of the lake and through the campground.  It’s fairly flat, which is nice after all the bridges we’ve been over in the last six weeks, and we were at the first mile marker before I knew it.

He was still ahead of me at the water stop, but his lead was beginning to shrink.  By the time we hit the turnaround at 1.5 miles I was closing in.  His game was strong and I didn’t know if I could catch him.  But as we approached the second mile I started to reel him in.  I’d catch up, he’d pull away.  We went back and forth for about half a mile, and then I kicked it into high gear.  Tom Petty was dancing with Mary Jane one last time as the final stretch approached.

My lead was still slim as we came up to the bridge.  I knew my time was pretty good and I might even have a chance of a PR, so I decided to run all the way across.  It’s nothing like the bridges at the Gate River Run or the Tomoka Half.  It’s flat as a pancake (mmm…pancakes!) and the finish line was about 1/4 mile from the end.  It would be close.

The run interval ended just as I got across.  I was about thirty seconds ahead of Joey and within sight of the time clock.  Thirty seven minutes and change.  My PR was 38:28.  So close.

I started to run.  I saw the clock hit the 38 minute mark.  Almost there!  My unofficial time was 38:09.  The final results haven’t been posted yet, but I was almost 20 seconds faster than my previous PR.  Oh happy day!

But the best was yet to come.  Turning in my results card, I discovered I was second in my age group.  And the medals went two deep.  Guess who was going home with some  hardware?  As it turned out, I hadn’t figured on the master’s award and I ended up getting FIRST place in my age group.

The Splits: (slightly off final time as previously noted)